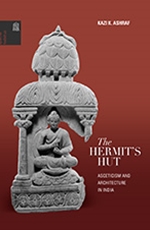 The Hermit?s Hut offers an original insight into the profound relationship between architecture and asceticism. Although architecture continually responds to ascetic compulsions, as in its frequent encounter with the question of excess and less, it is typically considered separate from asceticism. In contrast, this innovative book explores the rich and mutual ways in which asceticism and architecture are played out in each other?s practices. The question of asceticism is also considered?as neither a religious discourse nor a specific cultural tradition but as a perennial issue in the practice of culture. The work convincingly traces the influences from early Indian asceticism to Zen Buddhism to the Japanese teahouse?the latter opening the door to modern minimalism. As the book?s title suggests, the protagonist of the narrative is the nondescript hermit?s hut. Relying primarily on Buddhist materials, the author provides a complex narrative that stems from this simple structure, showing how the significance of the hut resonates widely and how the question of dwelling is central to ascetic imagination. In exploring the conjunctions of architecture and asceticism, he breaks new ground by presenting ascetic practice as fundamentally an architectural project, namely the fabrication of a ?last? hut. Through the conception of the last hut, he looks at the ascetic challenge of arriving at the edge of civilization and its echoes in the architectural quest for minimalism. The most vivid example comes from a well-known Buddhist text where the Buddha describes the ultimate ascetic moment, or nirvana, in cataclysmic terms using architectural metaphors: ?The roof-rafters will be shattered,? the Buddha declares, and the architect will ?no longer build the house again.? As the book compellingly shows, the physiological and spiritual transformation of the body is deeply intertwined with the art of building. The Hermit?s Hut weaves together the fields of architecture, anthropology, religion, and philosophy to offer multidisciplinary and historical insights. Written in an engaging and accessible manner, it will appeal to readers with diverse interests and in a variety of disciplines?whether one is interested in the history of ascetic architecture in India, the concept of ?home? in ancient India, or the theme of the body as building.