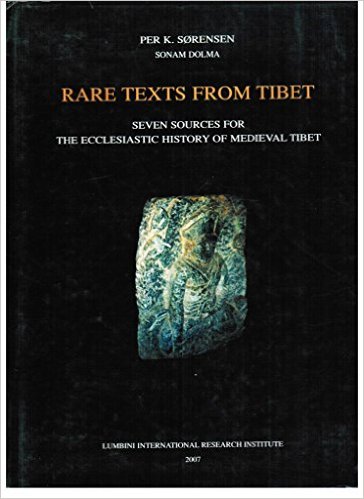 A preliminary perusal of a published set of rare and old bKa-brgyud-pa manuscript texts that recently surfaces in Lhasa - collected and published under the cover-title dPal Bri gung bka brgyud kyi chos mdzod che mo, The Grand Dharma Trove of the Glorious Bri-gung bKa-brgyud Tradition soon disclosed that it indeed represents a veritable treasure-trove of diverse but important texts, far more than just texts related to the Bri-gung lore and school. The printing of the set, however, may have taken place in Xining. It included a number of basic treatises and writings of the most illustrious bKa-brgyud-pa patriarchs, but also of unknown, and rare sources within the affluent sectarain bKa-brgyud-pa fold. Acknowleding its immence importance as well as the urcengy for a prompt presentation to an academic audience of at least some of the most interesting rarissima, it has been decided to select a number of the historical and ecclesiastical sources for special treatment in this publication. The selection was not conducted haphazardly. The texts chosen for closer scrutiny and finally for publication were deemed to be immensely significant for a number of obvious reasons, mainly historical-ecclesiastical. The choice to reproduce precisely the following seven texts does not reflect an incurable bibliophilists idiosyncratic whim for a particular genre within the immensely rich Tibetan written tradition, but was guided by a number of concerns, the principal among these was the circumstance that the following works, some of which were long known to exist but hitherto largely untraceable, contain especially valuable historical information. Many more texts from this bulk of sources, however, must be considered to be of equal importance compared to those chosen here, and equally informative and instructive wether for their doctrinal, esoteric, or for their ecclesiastical and historical contents. Many more in fact deserve proper scholarly attention and they no doubt will be targeted for adequate scrutiny in the future by devoted researchers. The texts presented here have been reproduced as found in the printed sources available, largely retaining all the othographical peculiarities, although these occasionally display some faulty and defective renditions. The punctuation chosen in the present book generally follows the original texts too, both what concerns the division and lay-out of the texts into chapters but also into paragraphs, still a modicum of liberty has been taken by the editor and some slight reshufflings have been made. Although due heed has been paid to the rules of the indigenous punctuation, the final arrangement has been conducted to the discretion of the present compiler, out of a preliminary contextual reading of the texts. These paragraphs could have been arranged differently and the choises made might to some occasionally appear somewhat arbitrary. Another arrangement, especially a differnt chapter division surely would be equally representative and feasible. As may be gauged from the Bri-gung set listed in the adjoined appendix, the compilers did not follow any strict editorial principle - occasionally parts of the same authors bka bum are allocated to different sections in the collection