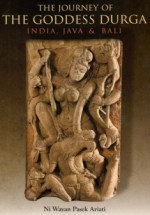 The Journey of the Goddess Durga: India, Java and Bali

Written by a Balinese historian this volume traces the long journey of images of the Goddess Durga within India in the 1st millennium CE and then the long evolution of these images in Java and Bali beginning c.700 CE in the Early Mataram kingdom of ancient Java. In addition to being a historical study this volume also documents the author's personal journey. Raised in a rural village of Bali, the author experienced images of Durga as an awe-inspiring and terrifying goddess renowned as the patroness of the black arts. During a two-year period of work and study in India (2001-2003) the author was exposed to images of the goddess Durga that depict her as a beautiful warrior goddess who protects the community of her worshippers. This work grows out of the author's experience of seeking to understand historical factors that led to the stark contrast of images of Durga that we see when comparing contemporary India and Bali. Dr. Ariati first traces the development of images of Durga in the 'great' and 'little' traditions of India, calling attention especially to the evidence of the Markandeya Purana for a movement of myths about the goddess from north to south India. She then traces the development of a unique 'Javanese pantheon' that includes images of Durga as a goddess who presides over the northern direction and protects the kingdom and reigning monarch from danger. Dr. Ariati then draws on the evidence of the Javanese exorcistic text Sudamala and reliefs illustrating this work at Candi Tigawangi, a temple constructed c. 1406 CE by a branch of the Majapahit dynasty. Noting that this is the starting point for depictions of demonic forms of Durga in Java, Dr. Ariati calls attention to the special role played by a male authority figure who exorcizes a demonic form of the goddess Durga and returns her to her benign form as the goddess Uma, or Parvati. Dr. Ariati traces the further development of this exorcistic theme in the Calon Arang tale of Bali and images of the 'divine witch' Rangda. She concludes her study by drawing parallels between the demonization of female images in myth and ritual and a campaign of disinformation that led to the destruction of Indonesia's first women's movement during the tumultuous early years of the New Order government. The author makes frequent use of texts in the Old Javanese and Balinese languages that enrich her historical study by introducing themes common to Balinese understanding of Durga that she groups in terms of the three roles of the goddess in creation (utpatti), preservation (sthiti) and dissolution (pralina).