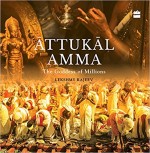 Attukal Amma: the goddess of millions

?ttuk?l Amma is the people’s Goddess; She is Bhadrakali, the all-pervading and protecting Mother. Legend has it that the Goddess chose the spot at ?ttuk?l, near Thiruvananthapuram, for an abode. Millions of women devotees the world over repose their unalloyed love and trust in ??ttuk?l Amma and they throng ?Attuk?l during the annual Pongala festival. ??ttuk?l Pongala has made it twice to The Guinness Book of World Records as the largest annual gathering of women – in 1997 with a participation of 1.5 million women devotees and in 2009 with a gathering of 2.5 million women. ? ?ttuk?l Amma: The Goddess of Millions familiarizes the reader with the Bhadrakali cult in Kerala and provides a ringside view of the Pongala festival and the various rituals associated with it, even as it raises doubts about the authenticity of the myth of Kannagi, the heroine of Chilappathikaram, associated with the temple. The book also introduces the reader to the esoteric world of rites and rituals of daily worship at the temple. There is something for everyone in this book, whether you are a scholar looking to decipher the significance of religious rites, a historian trying to trace the social and cultural evolution of goddess worship or an ordinary devotee yearning to get a glimpse of the beloved Goddess through Her lore. The pages of this book are interspersed with rare photographs and sketches, some of them depicting candid moments of the awe-inspiring rituals of the worship of Goddess Bhadrakali.