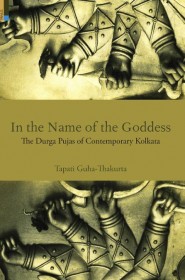 In the Name of the Goddess: The Durga Pujas of Contemporary Kolkata

This book unravels the anatomy of the newly-conjured ‘art’ event of Kolkata’s Durga Pujas by tracking the new production processes, the mounting trends of publicity and sponsorship as well as the practices of mass spectatorship that make for the transformed visual culture of the festival. The book’s central concern lies in conceptualizing a contemporary and artistic history of this urban festival. It examines the diversity of images and practices – from the consumerist spectacle and the bonanza of awards to the efflorescence of public installations and art and craft productions – that unfurl in this season ‘in the name of the goddess’. While profiling Durga Pujas as Kolkata’s biggest public art event, the book also addresses the ambivalence of the designations of ‘art’ and ‘artist’ in this field of production and viewership. The new artistic nomenclature of the festival, it is shown, is not easily secured, and has to struggle to assert itself within the body of the religious event and the ephemeral mass spectacle.