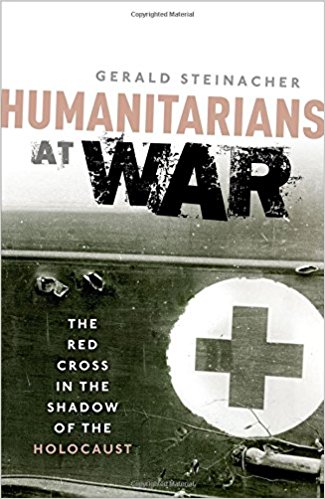 Humanitarians at War: The Red Cross in the Shadow of the Holocaust Hardcover

The Geneva-based International Committee of the Red Cross (ICRC) is one of the world's oldest, most prominent, and revered aid organizations. But at the end of World War II things could not have looked more different. Under fire for its failure to speak out against the Holocaust or to extend substantial assistance to Jews trapped in Nazi camps across Europe, the ICRC desperately needed to salvage its reputation in order to remain relevant in the post-war world. Indeed, the whole future of Switzerland's humanitarian flagship looked to hang in the balance at this time. Torn between defending Swiss neutrality and battling Communist critics in the early Cold War, the Red Cross leadership in Geneva emerged from the world war with a new commitment to protecting civilians caught in the crossfire of conflict. Yet they did so while interfering with Allied de-nazification efforts in Germany and elsewhere, and coming to the defence of former Nazis at the Nuremberg Trials. Not least, they provided the tools for many of Hitler's former henchmen, notorious figures such as Joseph Mengele and Adolf Eichmann, to slip out of Europe and escape prosecution - behaviour which did little to silence those critics in the Allied powers who unfavourably compared the 'shabby' neutrality of the Swiss with the 'good neutrality' of the Swedes, their eager rivals for leadership in international humanitarian initiatives. However, in spite of all this, by the end of the decade, the ICRC had emerged triumphant from its moment of existential crisis, navigating the new global order to reaffirm its leadership in world humanitarian affairs against the challenge of the Swedes, and playing a formative role in rewriting the rules of war in the Geneva Conventions of 1949. This uncompromising new history tells the remarkable and intriguing story of how the ICRC achieved this - successfully escaping the shadow of its ambiguous wartime record to forge a new role and a new identity in the post-1945 world.