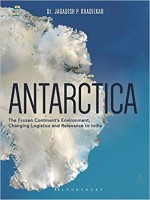 The author spent one and half years as head of the country’s first research station in Antarctica, Dakshin Gangotri. He discusses in details the frozen continent’s unique environmental aspects, the international presence, world governance and the Indian Antarctic Programme (IAP). The book throws light on how perspectives and positions of leading countries represented in Antarctica, such as the UK, Australia, New Zealand, Argentina, Chile, US, Russia, China, Japan, Norway, South Africa and India have shaped over the years. Their strategic interests, including those in the Arctic, provide for an interesting kaleidoscope of factors with the potential for various global scenarios in the coming years. The world will be surely and anxiously watching the developments in Antarctica in future. According to the widely accepted geological theory of plate tectonics, the Indian subcontinent was once a part of the supercontinent Gondwana, so named after one of the tribes of central India, along with Antarctica, Africa, Australia and South America. However, the general awareness about the continent in India is very poor. The book in details traces the history of India’s involvement in Antarctica, its three permanent stations conducting valuable scientific research and efforts to make a presence among other nations in the continent. It points out the country’s total dependence on all its logistics needs by outsourcing which may prove to be detrimental to its influence and interests. It would be interesting to see how India reacts to the positions of other nations in the changing global kaleidoscope and how it will gear itself, to establish a truly influential Antarctic presence for safeguarding its own strategic interests. India may do well to lay down a polar doctrine at the earliest.