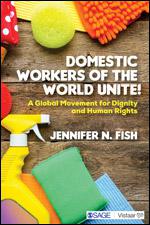 Domestic Workers of the World Unite!: A Global Movement for Dignity and Human Rights

Domestic workers exist on the margins of the world labor market. Maids, nannies, and other care workers are most often ‘off the books,’ working for long hours and low wages. They are not offered legal protections or benefits such as union membership and retirement plans. Most women who perform these jobs are migrants, often dependent upon their employers for boarding as well as immigration status. Jennifer Fish presents the compelling stories of the pioneering women who mobilized transnationally, negotiated and successfully received the first-ever granting of international standards for care work protections by the United Nations. This landmark victory not only legitimizes these household laborers’ demands, but also signals the need to consider human rights as a central component of workers’ rights. The book chronicles how a group with few resources could organize and act within the world’s most powerful structures and give voice to the plight of informal workers.