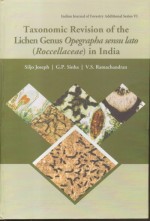 The genus Opegrapha sensu lato in India is revised. It deals with the detailed account of Opegrapha, known so far from India, based on comprehensive investigations on the types and voucher specimens deposited in various Indian and foreign herbaria viz., AMH, ASSAM, BM, BSA, BSHC, CAL, G, GLAM, hb, AWAS, H-NYL, L, LWG, LWU, M, PBL, S, TUR AND W, additional live collections and relevant literature. All the earlier erroneously identified herbarium collections were identified correctly based on the critical studies, and the specimens that required further evaluation were studied by obtaining these on loan. Information and images available in the databases of various national and international herbaria and associated libraries were critically studied. In this study, forty species are accepted, of which two are new to science, and contains some new combinations and lectotypification of species. It includes both lichenicolous and lichenized fungi, their morphology anatomy, chemistry, distribution, variation and interrelationships. Illustrations and images are provided for almost all the species. Detailed descriptions for the genus and for almost all species are provided. Keys have been prepared for the species. Species are listed alphabetically and are provided with the nomenclatural citations. Other details of the species like world and Indian distribution with distributional maps along with habit and habitat are provided. Special notes regarding the nomenclatural problems involved in the species are also discussed. Detailed list of specimens studied along with GPS data wherever possible are also provided for each species. Species affinities are also discussed. The present work resolves most of the problems with reference to identification and characterization of Opegrapha species in India. The present revisionary study on Opegrapha sensu lato in India with recent nomenclatural changes will serve as identification manual for researchers interested in this group of lichens in both India and abroad.