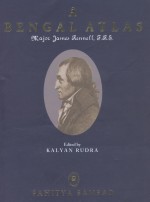 Contents: Vol. I Maps: Publisher’s note, Preface. Introduction. Maps. 1. The Delta of the Ganges with the adjacent countries on the East. 2. The Jungleterry District and adjacent Provinces. 3. South Bahar. 4. North Bahar. 5. The Northern Provinces of Bengal with the Bootan, Morung and Assam Frontiers. 6. The low lands beyond the Ganges from the Mauldah River to Silhet. 7. The provinces of Bengal, lying on the West of the Hooghly River with the Maharatta Frontier. 8. The conquered provinces on the South of Bahar, viz. Ramgur, Palamow and Chuta-Nagpour with their dependencies. 9. General map of Bengal and Bahar. 10. General map of Oude and Allahabad with part of Agra and Delhi. 11. The Cossimbuzar Island. 12. The environs of the city of Dacca. 13. The Doo-Ab from Allahabad to Calpy. 15. A map of Bengal, Bahar, Oude and Allahabad with part of Agra and Delhi exhibiting the course of the Ganges from Hurdwar to the Sea. Vol. II. The Journal, A Description of the Roads in Bengal and Bihar, An Account of the Ganges and Burrampooter Rivers: Publisher’s note. Preface. I. The Journal of Major James Rennell: 1. Preface. 2. Introduction. 3. The Journal. Appendices. List of works consulted. II. Description of the roads in Bengal and Bahar. Preface. Roads from Calcutta: Moorshedabad. Patna. Dacca. Cross Roads. III. An Account of the Ganges and Burrampooter Rivers. IV. Major James Rennell and the rise of Modern English Geography. Preface. 1. Home at Chudleigh – Service in the Navy. 2. Naval service in the East Indies. 3. Surveyor General of Bengal. 4. A review of Geography. 5. Geographical work for India. 6. Geographical work for Western Asia. 7. Geographical work for Africa. 8. Hydrography. 9. Antiquarian research. 10. The debt of posterity. 11. The last years. James Rennell (1742-1830) had been recognized as the greatest geographer that Great Britain had produced till the late 19th century. He started his career as sailor but gradually upgraded himself to an outstanding cartographer, a hydrographer and comparative geographer. He was pioneer in mapping the area under the administrative control of the East India Company and became the first Surveyor General of Bengal and that of India.