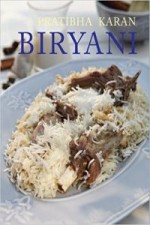 The biryani is India’s most beloved dish—one that has spread to all the four corners of the country and assumed many forms. It originated in the Mughal courts, flowering in the jagirs of Awadh and it is in Lucknow, Delhi and the small Muslim principalities of north India that one finds the classic versions, subtle, refined and delicately flavoured. Pratibha Karan gives us not just the definitive recipes from these regions but unearths rare and old dishes such as a biryani made with oranges, Rose Biryani and Kebab Biryani. In the south, the biryani has an equally distinguished lineage, if not more so. There are the blue-blooded biryanis of Hyderabad which include gems such as the Doodh ki Biryani, Keeme ki biryani and Bater ki biryani. Away from the royal courts, the biryani has adapted itself into a spicy local delicacy in Tamil Nadu, with many towns like Salem, Aambur, Dindigul boasting of their own signature version of the dish. Kerala too is home to many - a prawn biryani spiced with curry leaves and aniseed, a mutton one laced with star anise. There are as many stunning variations in the east and west—Goan biryanis using vinegar and olives; unusual dishes from the Parsi and Sindhi communities; Bengali adaptations using fish and mustard seeds, even a dish from Assam! Immaculately researched, full of extraordinary recipes and beautifully designed and photographed, Biryani is the ultimate book on this princely dish.