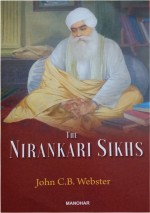 This is a new edition of Dr. Webster's The Nirankari Sikhs (1979), which has been recognized as ‘the single most important work on the history of Baba Dayal and his successors’. It updates the earlier edition not only by dealing with the past forty years of Nirankari history but also by taking into account subsequent scholarship on the history of Sikhism, especially during the first half of the nineteenth century. Further it also provides two additional primary sources of nineteenth century Nirankari history along with the nine included in the earlier edition. This new edition will be of value not only to those scholars interested in Nirankari history but also to those seeking a fuller understanding of the evolution of Sikh identity since the nineteenth century. Sikh identity has been a major issue for Nirankaris in recent decades because they have been confused with the Sant Nirankari Mandal which makes no claims to a Sikh identity. Nirankaris, like other Sikhs, base their beliefs and practices upon the Guru Granth Sahib and revere the ten Sikh gurus. For this reason they view themselves and are considered by other Sikhs, to be minority group within Sikhism. They are distinguished from other Sikhs, most obviously in not fully embracing the Khalsa tradition of the Sikhs and in having a continuing hereditary line of human gurus. How such similarities and differences have affected their own and the very nature of, Sikh identity over the past two centuries is an important part of this history.