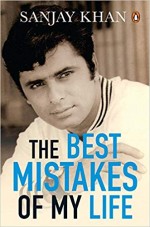 The Best Mistakes of My Life

Once deemed the most handsome man in Bollywood, Sanjay Khan's tryst with fame and stardom led him to many adventures across the world. He is best remembered for his performances in films like Ek Phool Do Mali and Abdullah as well as his portrayal of the great Tipu Sultan on television. In this exclusive autobiography he bares the details of a life full of action, excitement, drama, tragedy and, above all, courage. Written in a witty and engaging style, the book speaks of his formative years, his relationships with family, friends and co-stars, his interactions with world leaders, the stories behind his most remarkable films, and the fire on the set of The Sword of Tipu Sultan that almost killed him. Honest, engaging and revelatory, The Best Mistakes of My Life is the story of a star and a survivor who has resurrected himself with a vengeance each time life has thrown a curveball at him.