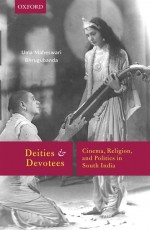 Deities and Devotees: Cinema, Religion and Politics in South India

Contents: Preface. Introduction: Cinema and religion-new genres, new publics and new subjectivities. Part I: Genealogies of Telugu Mythological and Devotional Films: 1. From representing gods to representing the Telugu people: N.T. Rama Rao, mythologicals and populism. 2. The Exemplary citizen–devotee and the other negotiating history and religious difference in the saint film. 3. The good wife and the goddess: scripting roles for the female citizen in the devotional film. Part II: Anthropology of Film-Making and Viewing Practices: 4. Embodied engagements: viewership practices and the habitus of Telugu Cinema. 5. Performing deities and devotees: debating film-making practices. Conclusion: Producing the ‘reality’ of religion-new ecologies of media. Filmography. Bibliography. Index. How have cinema and popular religion shaped each other? Is the display of devotion in a cinema hall the same as devotion in a temple? How do we understand cinema’s compelling power to mesmerize people? Unlike Hindi cinema, mythological and devotional films remained popular genres in Telugu (and Tamil too) until quite recently. The political success of film star N.T. Rama Rao, well-known for his portrayal of gods and kings, posed afresh the problem of cinema’s power to enthral. To what extent viewers were persuaded of his divinity became a matter of debate. In later decades, the figure of another kind of viewer haunted the discourses around cinema, that of the female viewer who got possessed during screenings of goddess films. Using questions around viewership as the focal point, this book studies the intersections between popular cinema, religion, and politics in South India. The first full-length study of Telugu mythological and devotional films, it combines an account of the history and politics of these genres with an anthropology of film-making and viewership practices. It argues that cinema and other audio-visual technologies lead to the re-orientation of sensibilities and the cultivation of new sensory modes.