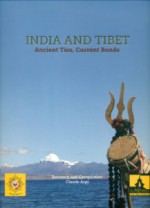 Contents: Tibet and India Ancient Links – Current Bonds A Shared Spiritual Lore The Himalayas as a Bridge The Light comes from India The Buddha Dharma Becomes State Religion The Three Religious Kings Tibet’s Relations with Its Neighbours A Script from India The Translation of Buddha’s Words Can Start The Art of Healing Tibetan Medicine and Ayurveda The Renaissance of Tibetan Buddhism The Second Propagation comes from India An Indian Dalai Lama Tsangyang Gyatso, the Sixth Dalai Lama Tibet’s Relations with Kashmir The Treaties with Ladakh and the Dogras The Empire Strikes The Younghusband Military Mission (1904) The Thirteenth Dalai Lama in India A Refugee in Kalimpong The Drawing of the Indo-Tibet Border The Simla Conference (1914) Caravans across the Himalayas The Transborder Trade Searching for the Lost Manuscripts Indian Cultural Missions in Tibet Pilgrimages The Holy Lands of Tibet and India The Asian Relations Conference Tibet Still Independent Stepping into British Shoes Tibet after India’s Independence Trading with India The Indian Trade Agencies in Tibet Indian Presence in Tibet Military Escort and Trade Agent Tibet becomes a Chinese Colony India has a New Neighbour From Sardar Patel to Nehru A Prophetic Letter (November 7, 1950) The Return to the Source The Dalai Lama and the Panchen Lama visit India (1956) Nehru crosses over to Tibet The Indian Prime Minister visits Chumbi Valley •The Road to Exile The Dalai Lama Arrives in India (1959) Preserving an Endangered Culture The Rehabilitation Starts A War Over Tibet Border The 1962 Sino-Indian Conflict When Tibet Fought for India The Tibetan Special Frontier Force How India Considers Tibet An Autonomous Region of China An Honoured Guest of India The Dalai Lama with Presidents and Prime Ministers Meeting Indian Leaders They had Strong Words for Tibet The Himalayan Renaisance The Role of the Dalai Lama The Khaches The Kashmiri Community in Tibet The Nalanda Tradition India’s Gift to Tibet The Dalai Lama and the People of India A Son of India Ackowledgments Our Gratitude for their Support, Advice and Illustrations The story perhaps started millions years ago when the Indian island collided with the Asian plate. Without this collision, life could have continued for eternity undisturbed on the Indian island, but it was neither the destiny of Tibet to remain a sea forever, nor the fate of India to be perpetually an island. This exhibition, using rare photos and illustrations, guide the reader through centuries of profound bonds between two ancient civilizations whose destinies have been, and still are, closely intermingled. Cultural, religious and economic links were abruptly discontinued in 1962, but one can hope that it is only a temporary phase and the ancient links will flourish again.