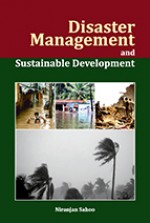 Contents: 1. Sustainable development and disaster reduction. 2. History and case studies of disaster. 3. Pipeline disasters and oil spills. 4. Climate change and disasters. 5. Land degradation and droughts. 6. Disaster mitigation and management in India. 7. Disaster management education. 8. Concept and benefits of corporate social responsibility (CSR). 9. Corporate social responsibility (CSR) in India. 10. Disaster management in select countries. Appendices. Bibliography. Index. A disaster is an extreme disruption of the functioning of a society that causes widespread human, material, and environmental losses that exceed the ability of the affected society to cope with its own resources. India’s geo-climatic conditions-as well as its high degree of socio-economic vulnerability-make it one of the most disaster-prone countries in the world. Disasters are sometimes classified according to whether they are natural disasters, or human-made disasters. For example, disasters caused by floods, droughts, tidal waves and earth tremors are generally considered natural disasters. Disasters caused by chemical or industrial accidents, environmental pollution, transport accidents and political unrest are classified as human-made or human-induced disasters since they are the direct result of human actions. The super cyclone in Orissa in October 1999 and the Bhuj earthquake in Gujarat in January 2001 underscored the need to adopt a multi-dimensional endeavour involving diverse scientific, engineering, financial and social processes. Need was also felt to adopt a multi-disciplinary and multi-sectoral approach and incorporation of risk reduction in the developmental plans and strategies. Disaster Management Act, 2005 changed the definition of disaster which now includes not only the events emanating from natural and man-made causes, but even those which are caused by accident or negligence. Prime Minister Shri Narendra Modi released the first Disaster Management Plan of India on June 1, 2016 that seeks to provide a framework and directions for government agencies for prevention, mitigation and management of disasters. This book provides a detailed account of disaster mitigation and management policies and programmes in India, including the social responsibility of corporates.