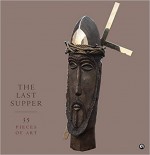 The Last Supper: 35 Pieces of Art

The enduring power of a great work of art lies in its ability to find a home in our imagination, where it will always retain a measure of freshness and mystery, even as its physical self fights a losing battle against time and decay. Leonardo da Vinci’s the last supper epitomizes this paradox. Whether rendered in oil on Canvas or Board, as prints, sculpture, or even as reproductions on Tiles, da Vinci’s legendary painting, the last supper, continues to inspire artists from around the world centuries after it was painted in situ at the refectory of the Dominican monastery of Santa Maria delle grazie, Milan. The thirty-five Indian artists represented in this book, too, have come under its spell. They span several generations, have evolved distinctive styles, inhabit varied geographical locations, and work in a variety of media—whether it’s himmat Shah’s larger-than-life Jesus or vaikuntam’s ethnic transposal of the protagonists, madhvi Parekh’s vibrant folk evocation or krishen Khanna’s masterful literary interpretation. As Ranjit Hoskote says in his introduction, ‘the spiritual impulse that animated da Vinci’s painting has travelled long distances in space and time: it assumes, and will continue to assume, unpredictable avatars’.