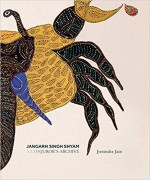 Before any sound critical framework could be evolved around the phenomenal artist Jangarh Singh Shyam as the originator of an extraordinary individualistic idiom of painting, ruthless market forces regrettably came to dominate his art and Jangarh himself became their first casualty. While trying to finish a large commission at a museum in Japan under adverse circumstances, Jangarh committed suicide in 2001. He was 40. A whole range of conditions, events and mediations associated with Jangarh’s life and his art practice has since remained underexplored. This book is a first attempt to construct an equitable account of the formation of his prodigious artistic body of work that founded his legacy and grew into a movement. As a prime critical analysis of Jangarh Singh Shyam’s oeuvre, this book also serves as a model framework for the study of a contemporary individual folk and tribal artist. Unlike other vernacular artists, Jangarh’s muse was moulded at Bharat Bhavan, a multi-arts complex in Bhopal, where he arrived as a teenager at modernist artist J. Swaminathan’s prompting. Here, though subtly othered by the commanding presence of the art school–trained moderns, Jangarh responded with a sense of elation to various new mediatory processes, such as the use of bright poster colours and the milky white expanse of paper, which led him to say, “The first time I dipped my brush in bright poster colours in Bhopal, tremors went through my body.” The book probes the efficacy of extra-cultural interventions into an individual artist’s operative and relatively well-grounded indigenous cultural tradition, and asks how the latter interacts with the new, while intentionally reinventing itself. Equipped with a powerful sensibility and a profound nostalgia for the world of his native village of Patangarh that he left behind, Jangarh created, over two decades in Bhopal, a sea of paintings inhabited by gods and demons, shamans and priests, birds and animals—crabs, scorpions, lizards and crocodiles—as well as forests, trees and shrubbery. The entire realm that had remained latent in his mind’s eye over the years thus came to life, image by image, in response to the new and alluring space of paper, canvas or the expansive walls that he turned into a vast and unique conjuror’s archive—opening up a personal space from where to speak.