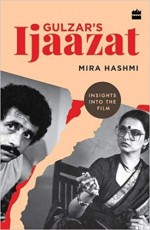 Gulzar's Ijaazat: Insights into the Film

By the time Gulzar made Ijaazat (1987), action-packed potboilers had replaced the genteel romanticism of yore, leaving few takers for a film about lost love and a broken marriage. And yet, three decades later, Ijaazat is a film that has endured. Gulzar's interpretation of a love triangle in Ijaazat - an evocative exploration of the strength and fragility of human relationships - was years ahead of its time. This book examines that interpretation to show how, thematically, the film was possibly Gulzar's most daring. It highlights how his skill as a storyteller - at once romantic and realistic - is exemplified by his complex characters. Contributing to that understanding is how the film's power also derived hugely from its sublime musical score by R.D. Burman. Drawing on Gulzar's recollections of the making of the film, Mira Hashmi''s book embraces the memory of the 'love' that for the poet wasn't always the answer, but a part of the question.