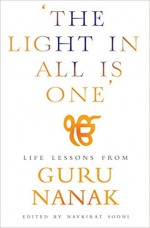 The Light in All is One: Life Lessons from Guru Nanak

Guru Nanak was a sixteenth-century reformer and the founder of Sikhism. He was the first of the ten Sikh gurus. He was born in Talwandi, near Lahore, during a time of political and religious discord and disharmony. Right from an early age, he displayed a deep knowledge of divine subjects and spirituality. He challenged rituals and shows of piety and attacked the Citadel of the caste system. He taught that the core tenets of living a good life were helping those less fortunate, making an honest living and meditating on the name of the Lord so as to overcome human weaknesses. He travelled extensively Mecca to the Himalayas to central India—with his faithful disciple Mardana, teaching about love, one God and truth and oneness with the Lord. He propagated the philosophy of salvation through meditation and rejected all forms of idolatry. His travels have been chronicled in the Janamsakhis, written decades after his death. His teachings have been immortalised in the form of 974 verses that form part of the holy text of Sikhism, the Guru granth Sahib. Translated and edited by navkirat Sodhi, the aphorisms in ‘the light in all is one’ contain some of Guru Nanak greatest teachings. These wise lessons about living a fulfilling life are timeless and universal.