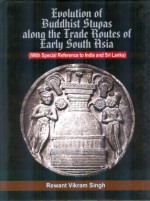 Evolution of Buddhist Stupas Along the Trade Routes of Early South Asia: With Special Reference to India and Sri Lanka (3rd Cent. BC to 6th Cent. A.D.)

In the present book, the author attempts to examine the evolution of Buddhist Stupas along the ancient maritime and overland trade routes connecting India and Sri Lanka. The work highlights a close association between trade routes and the centres of Buddhist institutions, which are predominantly located along the trade routes. Along with the caravanas of the trades, Buddhisum and Buddhist artistic influences, primarily represented by stupas, travelled from India to Sri Lanka. An interesting aspect of the stupas architecture is that it is definite and clearly identifiable, irrespective of the period of the country of its origin as it is prodeced as per the definite illustrations prescribed in ancient Buddhist literary sources. With time and space, the Buddhist art and architecture established an