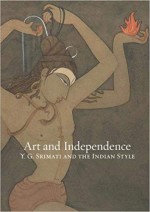 Art and Independence: Y G Srimati and the Indian Style

The career of Y. G. Srimati - classical singer, musician, dancer and painter - represents a continuum in which each of these skills and experiences merged, influencing and pollinating each other. Born in Mysore in 1926, Srimati was part of the generation much influenced by the rediscovery of a classical Sanskrit legacy devoted to the visual arts. Soon swept up in the nationalist movement for an independent India, she was deeply moved by the time she spent with Gandhi. For the young Srimati, the explicit referencing of the past and of religious subjects came together in an unparalleled way, driven by the explosive atmosphere of an India in the final push to independence. This experience gave form and meaning to her art, and largely defined her style. As John Guy demonstrates in this sumptuous volume, as a painter of the mid- and later 20th century, Y. G. Srimati embodied a traditionalist position, steadfast in her vision of an Indian style, one which resonated with those who knew India best.