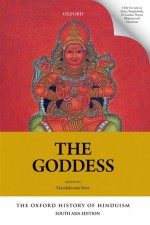 The Oxford History of Hinduism: The Goddess

Contents: 1. Introduction/Mandakranta Bose. 2. Cosmological, devotional and social perspectives on the Hindu goddess/Tracy Pintchman. 3. From magic to deity, matter to persona: the exaltation of maya/Bihani Sarkar. 4. Lalita, the graceful and enchanting Goddess of Kancipuram/Sanjukta Gupta. 5. Sri/Laksmi: Goddess of plenitude and ideal of womanhood/Mandakranta Bose. 6. The elusive Sarasvati: A Goddess, a river and the search for the universal in the particular/Elizabeth Rohlman. 7. Radha: lover and beloved of Krsna/Tracy Coleman. 8. Sita: enduring example for women/Heidi Pauwels. 9. Here are the daughters: reclaiming the girl child 'Kanya, Bala, Kumari' in the empowered tales and rituals of Sakta Tantra/Madhu Khanna. 10. Becoming a living goddess/Brenda Beck. 11. Bathukamma: the folk song tradition of the flower goddess of Telangana in South India/Prabhavati Reddy.12. A Goddess from Bengal: Devi Manasa, Goddess of Serpents/Krishna Datta. 13. Domestication of the disorderly Devi: the Can di Mangalakavya of Bengal/Saswati Sengupta.14. A 'Muslim' Poet in the Lap of the 'Hindu' Mother: the freedoms and burdens of Kazi Nazrul Islam and the Hindu Goddess Kali in Modern Bengal/Rachel Fell McDermott.15. The divine mother comes to Michigan/Tracy Pintchman. Afterword/Mandakranta Bose. The Oxford History of Hinduism: The Goddess provides a critical exposition of the Hindu idea of the divine feminine, or Devi, conceived as a singularity expressed in many forms. With the theological principles examined in the opening chapters, the book proceeds to describe and expound historically how individual manifestations of Devi have been imagined in Hindu religious culture and their impact upon Hindu social life. In this quest the contributors draw upon the history and philosophy of major Hindu ideologies, such as the Puranic, Tantric and Vaisnava belief systems. A particular distinction of the book is its attention not only to the major goddesses from the earliest period of Hindu religious history but also to goddesses of later origin, in many cases of regional provenance and influence. Viewed through the lens of worship practices, legend, and literature, belief in goddesses is discovered as the formative impulse of much of public and private life. The influence of the goddess culture is especially powerful on women's life, often paradoxically situating women between veneration and subjection. This apparent contradiction arises from the humanization of goddesses while acknowledging their divinity, which is central to Hindu beliefs. In addition to studying the social and theological aspect of the goddess ideology, the contributors take anthropological, sociological, and literary approaches to delineate the emotional force of the goddess figure that claims intense human attachments and shapes personal and communal lives.