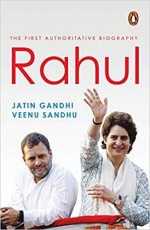 Opinions remain divided about Rahul Gandhi and his ability to lead the Congress to success. Some see in him the hope of a better and more inclusive country, while others question his abilities as a leader. Under him, the grand old party has shown signs of resurgence, but will it be enough to upset Narendra Modi and Amit Shah's grand plans for the 2019 battle? Nearly fifty years old himself, as Rahul leads a generational shift in one of the world's oldest political parties and prepares to take on the behemoth that the BJP is today, the book takes us through the changes he brought in to pave the way for a new Congress willing to challenge its opponents once again. What were the ideas and influences that propelled him, and who were his advisers? With sister Priyanka Gandhi Vadra by his side, how does he plan to tackle his new responsibilities? And, who is Rahul Gandhi-the real man-beneath the hype and the hatchet jobs?A political biography, Rahul traces the journey of the political novice of fifteen years ago to the principal challenger of Narendra Modi today, through his first decade in politi