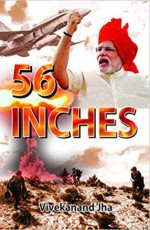 India, unfortunately, forgot the glory of ‘56 inches’ over time and consequently remained subjugated by the invaders and colonizer for ages. However even in those turbulent times, when India appeared to have lost her mooring, the great sons and daughters of Mother India always rose in protest against the repression and tyranny unleashed by the invaders and colonial power. The book encapsulates the details of such legion of brave men and women whose ‘56 inches’ alone provided the saving grace to the beleaguered Mother India in different times and eras. Starting from Chandragupta Maurya, Prithviraj Chauhan in the ancient India, to MaharanaPratap, ChhatrapatiShivaji, Guru Gobind Singh in the medieval times, India continued to exhibit her ‘56 inches’ to protest the foreign invasion and repression unleashed by the marauding Afghan tribes who invaded India from across the border intermittently and the Mughals who made India their homes after finding India a heaven on earth. Contents: 1. India over the ages. 2. Patel’s 56 inches. 3. Nehru jeopardises the national interest. 4. India rises again, Separation of East Pakistan. 5. Emergency and Operation Blue Star. 6. Irony of being a non-dynastic face. 7. Rise of an Indian statesman. 8. Dynasty rules by proxy. 9. Nation discovers a new messiah in 2014. 10. Doklam-No blinking first. 11. India under a strong leader. 12. India re-discovers the glory of 56 inches.