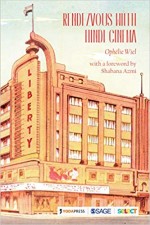 In rendezvous with Hindi cinema, ophélie wiel gives us a rare behind-the-scenes glimpse of the Bombay film industry by conducting no-holds-barred conversations with the people who work in the industry and, therefore, both share in and contribute to Hindi cinema. Wiel speaks to technicians, actors, film-makers, creative collaborators, critics, theatre owners and operations heads about their own location, role and challenges within the industry, The present state of Hindi cinema, and where they think it is headed. By way of these conversations, what emerges is a narrative of all that remains unchanged in the industry from its early days, such as the song-and-dance routine formula, as well as everything that has undergone metamorphosis, such as the diversity of voices Hindi cinema is finally beginning to speak for. This book will be a compelling read for people of the industry themselves, students and scholars of Hindi cinema, and movie buffs across the world, particularly those who have a special interest in Hollywood. “… A compilation of conversations with the very people who work in the Bombay film industry and therefore, both partake in and contribute to Hindi cinema. Technicians, actors, directors, film critics, individuals who, by being behind or in front of the camera, have chosen film as their profession. These interviews were not completely planned or predetermined. They were the result of unexpected meetings and opportunities … in more than half the interviews, what emerged were very powerful female voices. A large number of the people I interviewed also knew each other, having worked together on several occasions. They constitute this group of film-buffs who dream of changing the face of Hindi cinema.”.