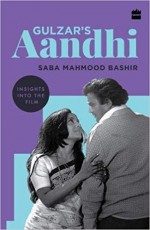 Gulzar's Aandhi: Insights into The Film

At one level, Gulzar's Aandhi (1975) is a story of estranged love between two headstrong and individualistic personalities; at another, it is a tongue-in-cheek comment on the political scenario of the country. Through a close textual analysis of the film, this book examines in detail its stellar cast, the language and dialogues, and the evergreen songs which had a major role in making the film a commercial success. Gulzar's own insights into the making of Aandhi (from an interview) further enhances the readers' understanding of the film. Saba Bashir's book will delight those wanting to savour the duality and drama that befit life, or shall we say, cinema.