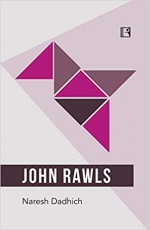 Contents: 1. Introduction. 2. Justice as Fairness. 3. First Principle. 4. Second Principle. 5. Original Position and Its Justification. 6. Duty and Obligation. 7. Theory of the Good. 8. Political Liberalism. 9. The Idea of a Well-Ordered Society. 10. The Law of Peoples. 11. Critique of John Rawls. Conclusion. John Rawls (1921–2002) is one of the leading political philosophers of the twentieth century. His seminal work A Theory of Justice (1971) revived normative political theory and reshaped contemporary political theory. His theory has influenced philosophy, politics, law and economics in more than one way. But, Rawlsian theory is not easy to understand, especially for beginners. Dadhich, in this introductory text, has tried to explain main ideas of Rawls in a concise and accessible manner. The book is structured along the development of Rawlsian theory as manifested in his works. It also has a full length chapter on the main critiques of Rawls. The book is specially written for scholars, teachers and students, keeping in mind their training in political theory