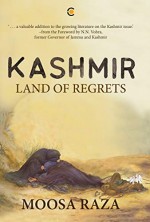 Moosa Raza was appointed chief secretary of Jammu and Kashmir in 1988--the brink of a tumultuous time in Indian history. The previous year’s state elections were suspected to have been rigged, and militants had found in them fresh ammunition for their call for ‘azadi’. Religious tensions threatened the social fabric of the state. Civil unrest was imminent as Srinagar and other major cities crumbled due to failing infrastructure. As Raza took up the reins of administration in the troubled state, he needed to first acquaint himself with the complex history that brought Kashmir to this impasse. The Kashmiri Muslim--Pandit conflict had deep roots fostered by one exploitative set of rulers after another, and the Shia--Sunni rift ran equally deep. In the backdrop of growing discontentment against the state policies and the diktats of the Indian government, the kidnapping of Rubaiya Sayeed, daughter of the Union home minister Mufti Mohammed Sayeed, became a turning point that nobody could have predicted. And yet, the paths to peace and progress were there too for the taking-a comprehensive plan for rebuilding the major cities, a network of roads and railways to connect the state to the rest of India, proposals to recruit young Muslim men into the security forces, and modern schools to combat agenda-driven learning in religious centres. Can the state and its administrators step up to the task of making real change, or will corruption and apathy continue to lay waste to one of the most beautiful states of India? Kashmir: Land of Regrets tries to answer these questions. The book provides multiple perspectives from which to assess the nascent stages of the insurgency, a movement that would eventually become one of the greatest threats to the idea of India as a just and secular republic.