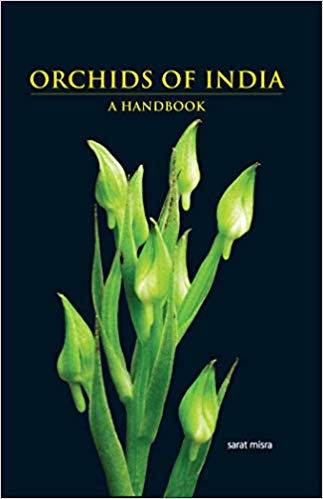 Orchids of India: A Handbook

The Book “Orchids of India – A Handbook” includes all known species of orchids found in India and enumerates all the 1484 (1430 species, 8 subspecies and 46 varieties) taxa. Dr. Sarat Misra's book "Orchids of India – A glimpse” which was published in the year 2007, has been very useful to students of Taxonomy and is now being cited very often. The book was an inventory aimed to enumerate all known orchids of India at that time and it included 1331 species / subspecies with their updated nomenclature. Twelve years have elapsed since then. In the meanwhile, several findings on revisionary works or additions to the Indian orchid flora – either new discoveries or new record to the Indian flora – have come up. It was felt, necessary to put these findings together and bring out an updated checklist of the Indian orchids, and therefore, this book “Orchids of India – A Handbook” came up. The book provides a Key to 191 genera found in India. The exhaustive Generic description provides elaborate morphological features of 191 genera. It gives the worldwide distribution of each genus, total number of species under it found in the world and in India. Scientific illustration of the habit and the flower for at least one species under each genus has been provided; more than one figure has been provided where much variation in the species is observed. The enumeration of all the 1484 orchids, which includes 465 endemic elements, has been alphabetically arranged in a tabular form. It also gives their zone of occurrence and flowering period. Growth habits of the terrestrial, mycotrophic and epiphytic forms of orchids have been discussed with the help of drawings. This gives an idea of the life cycle of an orchid plant. The Morphology provides details of the various component of like stem, leaf, inflorescence and flower etc. of orchids and the variation met within. Flowering pattern in orchids has been discussed with their behavior and seasonality. The Ecology provides the geographical zones in India and the distribution of orchids there followed by the altitudinal zones in India and orchids growing there. The book includes a Glossary of botanical terms and an Index to the scientific names. The book is well illustrated with 480 Line drawings and more than 225 colored photographs, which would help to easily understand the taxonomy of Orchidaceae, the most advanced family, and the floral morphology of which is the most complex among all the flowering plants of the world. The manuscript of the book has been reviewed by Prof. D. L. Szlachetko, University of Gdansk, Poland, who has also written the Foreword of the book.