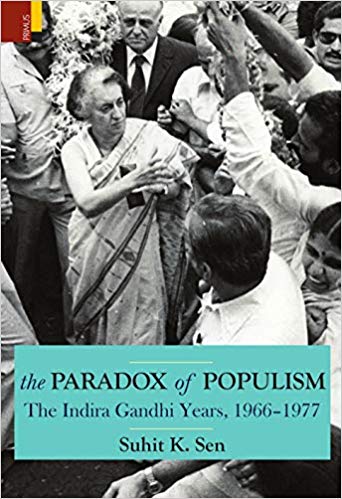 The paradox of populism: the Indira Gandhi years studies the changing dynamics of politics brought about by the Eclipse of Congress hegemony, caused principally by the 1967 election results and the split in the Congress party in 1969. It examines the proposition, widely accepted, that Indira Gandhi systematically subverted constitutional democracy by undermining institutions like the Parliament and the cabinet, and established authoritarian control of both the government and the party after the split. It concludes that such widespread subversion happened only after the imposition of the emergency, when Mrs Gandhi succeeded in concentrating power in her hands. Soon after Mrs Gandhi was installed as prime Minister in 1966, she sought to break free from the shackles of the party bosses and stamp on the Polity the independence of the Government from the organization, a Convention established in the late 1940s and early 1950s by Jawaharlal Nehru and the party high command. A struggle for power broke out between Mrs Gandhi’s camp and the party bosses, which led, in 1969, to A split in the party. This struggle was exacerbated by the erosion of the Congress Party’s hegemony after the fourth General elections of 1967, when it lost power in a number of states and saw its majority in the Parliament significantly whittled down.