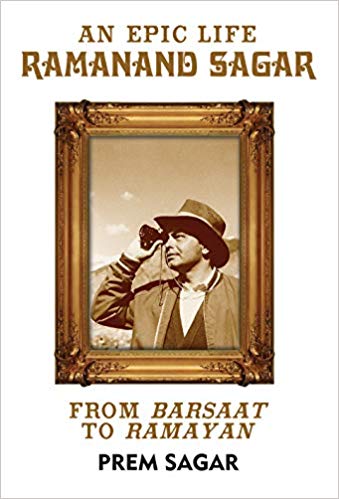 An Epic Life: Ramanand Sagar: From Barsaat to Ramayan

On 25 January 1987, with the telecast of the very first episode of Ramayan, Indian television changed for all time to come. In a matter of weeks, the series became a national obsession. During the Ramayan slot, roads emptied out. No marriages and political rallies were scheduled for that time. More than three decades later, there has been nothing to match it. Ramanand Sagar, the man behind the phenomenon and a successful filmmaker from Bombay, was among the first to recognise the immense power of television. He first made his mark as a writer in Raj Kapoor’s Barsat (1949). From 1961 to 1970, Sagar wrote, produced and directed six consecutive silver jubilee hits—Ghunghat, Zindagi, Arzoo, Ankhen, Geet and Lalkar. An Epic Life: Ramanand Sagar, From Barsaat to Ramayan, written by his son, Prem Sagar, an award-winning cinematographer, is an intimate look at the life of a visionary. It traces Sagar’s life from his birth in Kashmir in 1917, his dramatic escape in 1947 when Pakistani tribesmen attacked the state, his arrival in Bombay and his subsequent glorious career—the crowning achievement of which was the smashing success of Ramayan.