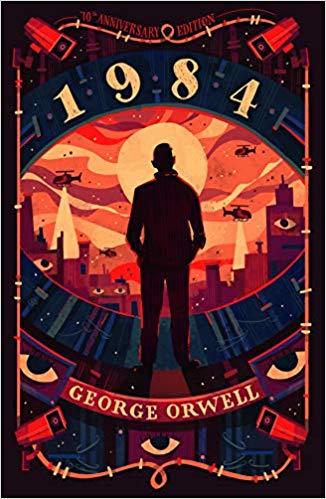 1984 is considered a work of political prophecy that continues to grow more haunting as it becomes more real with every passing day. It was published seventy years ago. English political novelist George Orwell wrote this dystopian tale as a warning against totalitarianism that told us what the world would be without the freedom to think. It has now become one of the most significant novels of the 20th century. This novel tells the story of Winston Smith, who lives in a society that follows a totalitarian ideology propagated by the party. In this repressive world big brother controls everything, telescreens see everything, police helicopters circle overhead all the time, the thought police uncover every Act of betrayal, the Ministry of love deals in pain and despair, the Ministry of peace wages war and dissent is not tolerated in the mind. Despite all this, in his longing for truth and liberty, Smith begins a secret love affair with a fellow-worker Julia, but soon discovers the true price of freedom is betrayal. The terrifying glimpse into a future that Orwell gives us in 1984 where everyone is a slave to a tyrannical regime has made it perhaps the most influential book of the 20th century. With this special edition, we celebrate the 70th anniversary of this masterpiece.