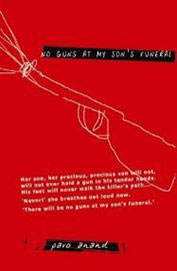 No Guns at my Son's Funeral

Aftab, a young Kashmiri boy, leads a double life. By day, he is a normal, bubbly teenager whose p;rime concerns are cricket, family and friends. The night holds the secrets of the life of a child, one who sneaks away to confabulate with Akram and his fledgling group of tearaway terrorists. Akram, so handsome, so exciting. But what Aftab doesn't realize, so dangerous. Aftab is in compleete awe of Akram and is willing to follow him to the ends of the earth. And Akram is more than willing to send him there. Though set against the militancy in Kashmir, this novel could belong anywhere in today's world where violence is just a breath away. A brave story, never told in so raw a form, this is 'reality fiction' at its most real. A book for teenagers - and for adults of all ages - who live in a world where 'cops and robbers' is not fun any more, but a deadly game.