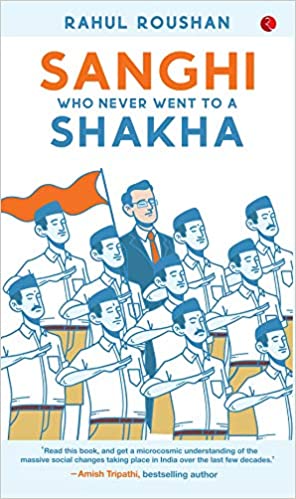 Sanghi who never went to a Shakha (Paperback)

This is the journey of a person who hated the word ‘Sanghi’ but ended up happily adopting it as a label. Rahul Roushan shot to fame around 2009–10 as the ‘Pagal Patrakar’, the pseudonym he used while writing for Faking News. Back then he was seen just as a founder-editor of the news satire website with no special interest in politics or ideology. The first time Rahul Roushan was called a Sanghi, he felt deeply offended. After all, he held a Bachelor’s degree in Maths from Patna University, a post-graduate diploma in journalism from IIMC, New Delhi, an MBA from IIM Ahmedabad and a self-made media entrepreneur. Sanghi literally means someone who is a member of the right-wing RSS (Rashtriya Swayamsevak Sangh) or its affiliates, but the ‘liberals’ use the term liberally to deride those who differ with their political and ideological stand, or those who wear Hinduism on their sleeves. This book analyses why Hindutva as an ideology is no longer anathema and what brought about this change. Why did a country that was ruled for decades by people espousing Nehruvian secularism suddenly began to align with the ‘communal politics’ of the Bharatiya Janata Party (BJP)? The book is the story of this transformation. This is not an autobiography, though it could read like one in parts. It is not even a collection of intellectual essays, though it could read like one in parts. It is the retelling of some historical events and how those events impacted the journey of Rahul Roushan and countless people like him. The book looks at factors like education, media, technology and obviously, electoral politics, which played a key role in this transformation. The book also touches upon some of the personal experiences of the author, both as a media entrepreneur and a journalist. In author’s words, ‘This book will be of special interest to readers who just want to badmouth me and the book, but I really hope the same people make an earnest effort to also understand what changed India and all those Sanghis who never went to any shakha.’