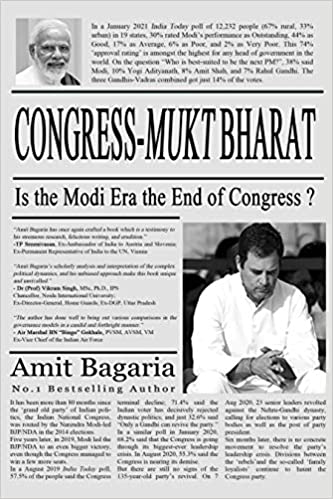 Congress-Mukt Bharat: Is the Modi Era the End of Congress? (Paperback)

Indian National Congress. For the first 92 years, the 135-year-old party was headed by a Nehru-Gandhi family member for only 11 years, even though Nehru and Indira were collectively the PM of India for 28 years. Then things changed. Indira was the party president for seven consecutive years, and succeeded by her son Rajiv Gandhi for six years. After Rajiv’s assassination in 1991, PV Narasimha Rao was party president for five years. Sitaram Kesri was the next Congress president for 18 months. Enter Sonia Gandhi. Barring a 20-month period when her son Rahul held the post, she has been Congress president for 23 years. During her ‘reign’, the party has seen an average 31.6% decline in vote share and a 50.2% reduction in seats in the Lok Sabha. Due to her not allowing a proper election for the post of party president — as was the norm for the first 92 years — the Congress is collapsing. Ever since the Modi-led NDA routed the party in 2014, several Congressmen have been complaining about “lack of effective leadership.” Narendra Modi. Whether you admire him or belittle him, adore him or chastise him, praise him or ridicule him, love him or hate him, no Indian can pretend to ignore the man. Since September 2013, he has been the biggest newsmaker in India . On 15th August 2020, Modi became the longest-serving non-Congress PM of India. The first three chapters of this easy-to-read book are about Congress party’s corruption. The next three analyse the 2019 elections in great detail. Then, there is a chapter about the Left Front and one on the Congress’ performance in each state since Sonia became the chief. The next eight chapters are about Modi, his successes, his failures, and the work he has done in 80 months. The longest chapter, divided into 14 sections, details the successes and failures of India’s 14 prime ministers. “Is Congress Becoming Anti-India” and “Congress-Mukt Bharat” are the final two chapters. The Appendix lays out ‘Agenda 2024’ for India.