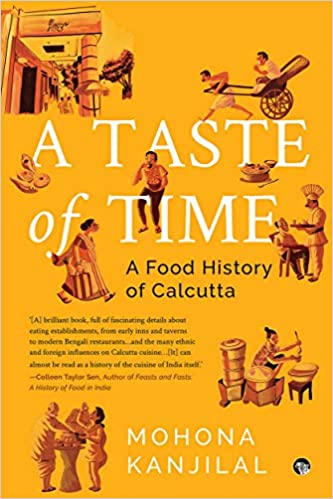 A Taste of Time: A Food History of Calcutta

Calcutta, once the nucleus of the Raj, was at the heart of a thriving economy and unparalleled administration. Over the centuries, this teeming, cosmopolitan metropolis has become home to people from various communities who have lent its food and culture their distinctive tastes and culinary rituals. The heady romance of palates and flavours in the ‘Royal Capital’ has fostered diversity in food and culture all the while adhering to the city’s Bengali roots. A Taste of Time is an insightful journey through the ever-changing landscape of Calcutta’s food and cultural milieu, from its decades-old cutlet, jhal muri,and puchka stalls to its iconic continental restaurants like Firpo’s and Flurys; from its oldest tea shop, Favourite Cabin, set up in 1924, to the 21st-century fine-dining restaurant “threesixtythree” . Mohona Kanjilal, through her immaculate research, deftly captures the stories behind the city’s endearing culture of‘bikel chaar-ter cha’ (tea at 4 p.m.); its renowned bakeries like Nahoum’s; and the invention of rasogollas and samosas (or shingara). Diving into Calcutta’s dazzling history, she explores how the food habits of early European settlers, Jewish, Armenian, Chinese, Parsi and other expats, and the city’s next-door neighbours like Darjeeling and Odisha, have made the culinary fabric of Calcutta immensely rich and layered. This delightful and comprehensive history of food in Calcutta, peppered with mouth-watering nuggets, recipes and intriguing accounts of some revolutionary personalities of Bengal will appeal to the mind and tastebuds alike.