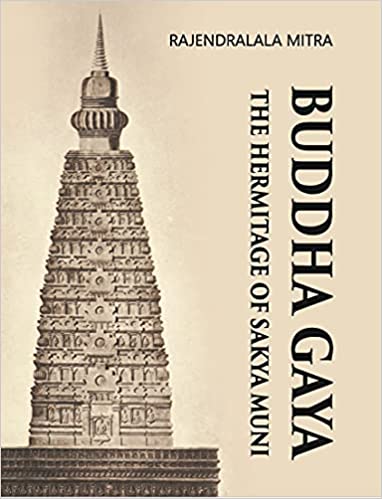 Buddha Gaya is one of the four holiest places of Buddhism. Here Buddha attained Enlightenment after having meditated for 49 days under the Bodhi tree. In the 3rd century BC emperor Ashoka built a shrine to mark this spot of Buddha’s Sambodhi. A later stone railing enclosing this shrine survives from the period (1st century BC). Sanchi and Barhut depict the shrine on several reliefs. The shrine was replaced by the Mahabodhi temple, begun in the Kushan period in the 2nd century AD. In the Pala-Sena period it was provided with statuary and revetment. Burmese Buddhists began to restore it in 1877, but a proper scientific restoration was done by Cunningham in 1882. Dr. Rajendralala Mitra visited Buddha Gaya in 1877 in compliance with the wishes of the Lt. Governor of Bengal. He was the first to draw up maps, plans and to compile a record of its archaeology. The present work was thus the first attempt at a scientific study of the site, its monuments and antiquities, as well as its descriptions in Buddhist texts and Puranas. It describes the geography, buildings, ancient structures, and the religious legends of Gaya. It is still the only work to give an extensive account of the importance of Gaya in Buddha’s enlightenment. The architectural remains, sculptures, carvings on railings, copings and pillars, inscriptions from the earliest period, and chronology are detailed by R. Mitra. The book retains its value in understanding the vicissitudes of the reconstruction of the Mahabodhi and surrounding buildings, its centrality in the Enlightenment of Lord Buddha and its role as the Centrum of the Buddhist world. About the Author:-Raja Rajendralala Mitra (1822 – 1891) was among the first Indian cultural researcher and historian writing in English. A polymath, and a member of the Asiatic Society of Bengal, he was a pioneer figure in the Bengali Renaissance.