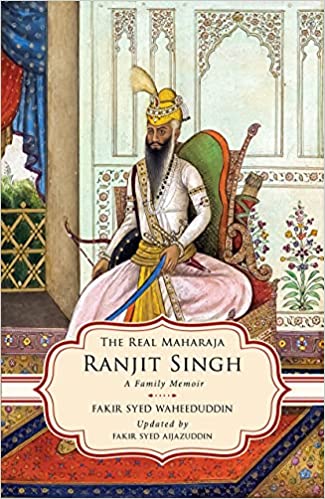 Few biographies of the unique Sikh Maharaja Ranjit Singh have achieved the popularity that Fakir Waheeduddin’s The Real Maharaja Ranjit Singh has done. Since its initial publication in 1965, the book has been reprinted a number of times but never with the authenticity that this present volume offers. In many ways, it can be regarded as a companion to Khushwant Singh’s biography – with one essential difference: Khushwant Singh’s book was the equivalent of an ‘official’ memoir, whereas Fakir Waheeduddin’s is more in the nature of more intimate collage of family recollections woven into a historical narrative. Fakir Waheeduddin felt qualified to undertake such a venture because members of his Fakir family had never forgotten the debt they, their ancestors and descendants owed to the largesse of their Sikh patron. He could easily have kept the three Muslim courtiers – Azizuddin, Imamuddin and Nuruddin – at a distance. Yet he chose to entrust them with positions that demanded probity, loyalty and integrity. That they were able to serve the Sikh darbar even after the maharaja’s death in 1839 says volumes to their devotion and to the maharaja’s sagacity in choosing them. The Real Maharaja Ranjit Singh is offered to the public in a revised edition, embellished by vignettes taken from 19th century engravings, contemporary to the years of the Sikh kingdom of Lahore. It is an invaluable source indispensable to the study of Punjab’s history, seen through the eyes of a later but genuine admirer.