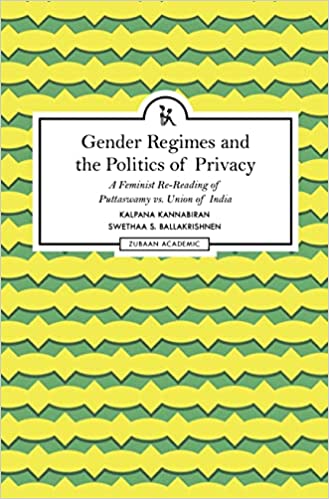 Gender Regimes and the Politics of Privacy: A Feminist Re-Reading of Puttaswamy Vs. Union of India

In 2017 an all-male nine-judge bench of the Indian Supreme Court delivered the landmark Justice K.S. Puttaswamy Ors v. Union of India judgment on privacy. In this book, the authors look at the embodiment of privacy in the judgment to examine the ways in which the bench articulated the question of gender. They argue that while Puttaswamy has been central in clarifying the extent of (and extensions to) the right to privacy as a fundamental right, the discourse on this has long existed in India ― in various gendered social movements, policy-making around women’s rights, feminist historiography, and discourses on the family, sexual rights, autonomy and choice (in and outside courts), dignity, and critiques of surveillance ― and provides an important context within which the judgment becomes especially relevant. The authors unpack the underlying logics of the right to privacy within the default prism of the notional identity of the normative household and offer an entry point to re-read existing jurisprudence on rape, sexual assault, sexual harassment, atrocity, and sexual violence and humiliation under conditions of mass violence. They suggest a springboard for the possibility of theorizing personhood within the right to privacy, arguing that while the judgment sets up radical precedent on the questions of sexual minorities, it remains trapped in a reductionist reading of the female body within heteronormativity.