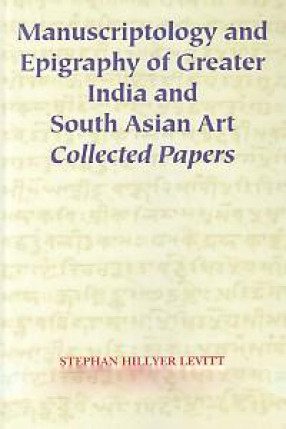 This Volume of papers on manuscriptology and epigraphy of Greater India, and South Asian art reproduces papers as originally published with marginal corrections. Disparate academic disciplines are often involved in the treatment of specific topics, as can be seen in the various papers in this volume. Here, the author reproduce the manuscript cataloguing efforts of his other than the large A Descriptive Catalog of Indic Manuscripts in the Library of the University of Pennsylvania and also reproduce papers on scribal practices, writing, and epigraphy which grew out of these cataloguing efforts, and out of collating eight Jainanagari manuscripts of the Jaina-Maharastri Mahipalacarita of Viradevagani under the direction of W. Norman Brown. He present here his studies on Sinhalese painted wooden book covers, the study of which was suggested to him by Prof Ernest Bender, and his studies on Bhagavadgita manuscript illustrations. Many of the papers in this collection treat manuscripts in the collections of the University of Pennsylvania. The translation of the text on mudras that was printed in The Adyar Library Bulletion was not Author's, but rater was done by one of the Prof. K. Kujunni Raja's students. He pointed out that in a few places the text as copied from an original palm leaf manuscript by L.A. Ravi Varma. Within the Upanisads themselves the word occurs in several verses, such as in Chandogya Upanisad 1.13.4, with a meaning that has been translated variously as 'secret doctrine' `mystic meaning', or 'hidden connections'. M. Monier-Williams, in his Sanskrit-English Dictionary, translates the word in such locations as "esoteric doctrine, secret doctrine, mysterious or mystical meaning, words of mystery, etc.