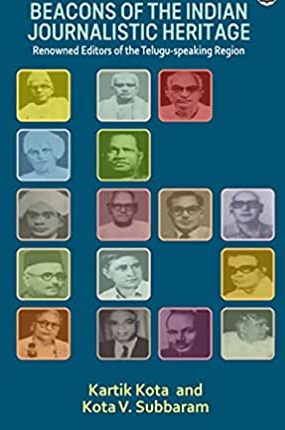 Beacons of the Indian Journalistic Heritage: Renowned Editors of the Telugu-speaking Region

Beacons of the Indian Journalistic Heritage: RenownedEditorsof the Telugu-speaking Region is a compellingly readable book about the life-sketches of sixteen editors.The sincerity, honesty, integrity and the personal sacrifice of each one of the editors as individuals; the keen observation of social events and political happenings during the Indian Independence Movement expressed with courage, forthrightness, and withan uncompromising attitude in their respective periodicals of the times; and the zeal and enthusiasm with which they informed and inspired the reading public to join hands together in the Indian Independence Movement willingly – all these are brought outin this book by the translator-authors in an impressive manner. The professional journalistic ethics which the luminaries, belonging to the Telugu-speaking region,pioneeringly expounded and unfailingly followed all through, as detailed in each of the sixteen sub-texts of this book, serve as beacons of Indian journalistic heritage in generaland could as well guide today’s and tomorrow’s journalists worldwide and even enliven the fieldof journalism. About the Authors Kartik Kota was born in 1971 at Varanasi, Uttar Pradesh state, India in a Telugu-speaking family, and grew up in the Republic of Ireland and Canada for the first five years. After his returnto India, he had his schooling at Rohtak in Haryana state. He went on to do his secondary level and higher secondary level studies through the National Institute of Open Schooling, Delhi. Kota V. Subbaram was born in 1942 in the Telugu speaking state, Andhra Pradesh, India.After his higher education at Banaras Hindu University, Varanasi, India, and his Ph.D. degree(Physics) from the Indian Institute of Technology, Kanpur, India, he spent five years in the Republic of Ireland and Canada, pursuing scientific research studies.