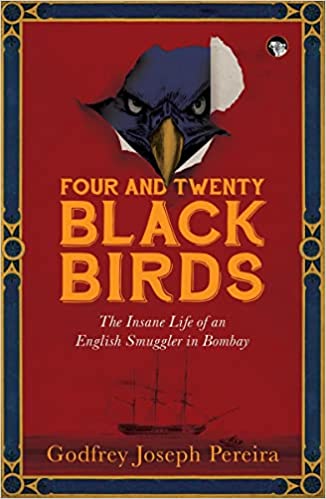 Four and Twenty Black Birds: The Insane Life of an English Smuggler in Bombay

Midnight, 15 August 1947. As India’s tryst with destiny reverberated across the world, Charlie Strongbow, born in Bombay, a renegade Englishman, mercenary, philosopher and schizophrenic, began his own bizarre journey. While nascent India floundered and struggled, Charlie, along with an English goon called Thommo, a devious accountant named Willie, a vicious Portuguese temptress, Dona Maria, and twenty British desperadoes, took possession of Cross Island near the Bombay Docks. Here they functioned in illegal harmony, bound by no rules and no principles, and set about building black-market trade between Southampton and Bombay.There was no stopping Charlie—but for memories of his own past filled with the misery of childhood abuse and guilt at having abandoned his daughters. As he drank himself to senselessness and let his inner demons take over, Detective Desai, a man Charlie had destroyed, raised an unrelenting war against Cross Island. But the severest blow of all would be struck by Dona Maria. Based on true events, Four and Twenty Blackbirds is an utterly gripping novel— the disturbing, astonishing story of an Englishman who won everything but lost his soul on a no man’s land in the Arabian Sea.