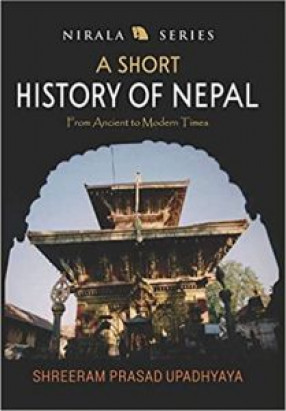 A Short History of Nepal: From Ancient to Modern Times

A Short History of Nepal by renowned Nepalese historian Shreeram Prasad Upadhyaya is a comprehensive and updated account of Nepalese history ranging from Ancient to Modern times. Nepal’s history is unique and different from the rest of the world. The Gopal dynasty in Nepalese history represents agricultural age of human civilization. Originally, it’s believed Nepal valley (Kathmandu) was a lake. Manjushri from the north and God Krishna along with other gopals from south made this valley suitable place for human settlement. Dr. Upadhyaya in a nutshell covers the history of the Gopals, the Kirats and the Lichhavis in ancient period, the Mallas in Medieval period, the Shahs and the Ranas of Modern period along with rulers of the Republic in the contemporary Nepal. In his opinion, the Vedic history has great influence on the Nepalese way of life. The tradition and culture of the people of Nepal had great impact on the formation of civil court and their practices. The Gopal period of Nepal was important in the agricultural development whereas the Kirat period played momentous role in the expansion of trade and industry. The Lichhavi period was popular for moral values and the Medieval period for art and architecture. The modern period of Nepal saw many changes. Prithivinarayan Shah made great contribution by unifying Nepal and the Rana period was significant in the preservation of national sovereignty and integrity, in spite of its despotic nature. The democratic changes after the fall of atrocious Ranas brought Nepal in touch with the outside world. The continuous struggle and strife of the people of Nepal brought forth the current Republic form of Government. The people of Nepal are keenly watching the activities of Federal, Provincial and local Government with a hope to peace and prosperity ultimately ushers into the world’s youngest republic. Short History of Nepal is a wonderful book meticulously sketching the major events in an efficient manner, doing the amaz