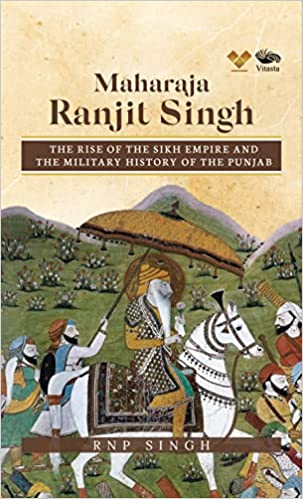 Maharaja Ranjit Singh: The Rise of the Sikh Empire and The Military History of The Punjab

Ranjit Singh was the most adventurous, audacious, and sagacious ruler of the Indian subcontinent since Chandragupta Maurya. Like the Kohinoor he wore, he was a gem among rulers. He rose like a bright and brief firmament when India became a part of the global colonial geopolitics. He abolished the death sentence and created a new empire based on principles of statecraft. In the 1770s, the Punjab was sixty-eight pieces of a wild and prosperous land inhabited by a brutal and querulous people making a living by plunder even as invasion after invasion from the north-west frontier trampled it. Ranjit Singh stemmed these Afghan raids by capturing all the passes on the Hindu Kush and wresting from Kabul the fairest of its provinces. His matchless and modern army comprised 100,000 disciplined and well-armed men and 300 canons that stood between expansionist Britain and imperial Russia. In his fourth biographical work, RNP Singh brings our readers this incredible life story of a self-made Maharaja who became the last bastion of a free India in the 1830s.