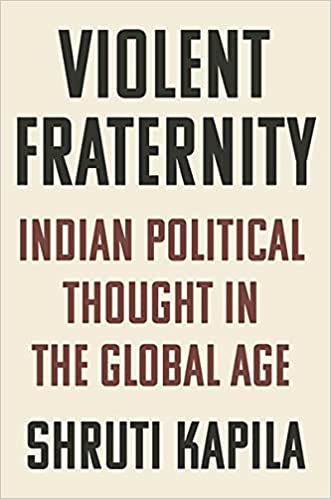 Violent Fraternity is a major history of the political thought that laid the foundations of modern India. Taking readers from the dawn of the twentieth century to the independence of India and formation of Pakistan in 1947, the book is a testament to the power of ideas to drive historical transformation. Shruti Kapila sheds new light on leading figures such as M. K. Gandhi, Muhammad Iqbal, B. R. Ambedkar, and Vinayak Savarkar, the founder of Hindutva, showing how they were innovative political thinkers as well as influential political actors. She also examines lesser-known figures who contributed to the making of a new canon of political thought, such as B. G. Tilak, considered by Lenin to be the "fountainhead of revolution in Asia," and Sardar Patel, India's first deputy prime minister. Kapila argues that it was in India that modern political languages were remade through a revolution that defied fidelity to any exclusive ideology. The book shows how the foundational questions of politics were addressed in the shadow of imperialism to create both a sovereign India and the world's first avowedly Muslim nation, Pakistan. Fraternity was lost only to be found again in violence as the Indian age signalled the emergence of intimate enmity. A compelling work of scholarship, Violent Fraternity demonstrates why India, with its breathtaking scale and diversity, redefined the nature of political violence for the modern global era.