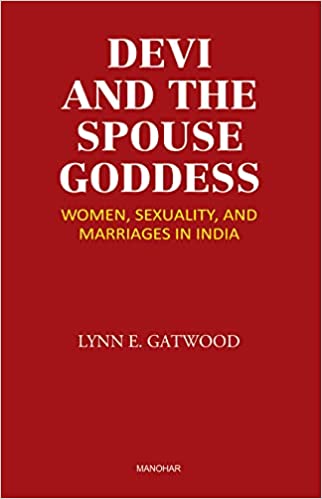 Devi and the Spouse Goddess: Women, Sexuality, and Marriages in India

Over the centuries the idealized roles women were expected to play in Indian society have embodied in images of Hindu deities. Society, particularly the male Brahmanical elite, expected decent upper caste women to conform to the image of the benign Spouse Goddess. The upper caste woman, like the Spouse Goddess, was expected to be a worshipful and dutiful mate to her husband. She appears as Sarasvati, wife of Brahma; Lakshmi, paired with Vishnu; and Parvati, mate of Shiva. The Spouse Goddess’ sexuality is controlled by marriage and is directed towards procreation, particularly of male heirs. When control of the Spouse Goddess’ sexuality is lost, and she is (or is thought) unfaithful she becomes the Spouse-Goddess-out-of-control, a motive force in many of India's epic tales. About the Author Lynn E. Gatwood (1945) passed her M.A. in Anthropology in 1984, with focus on South Asia. She is a member of the American Anthropological Association. Besides her anthropological interests, she is a singer, song-writer and guitar player.