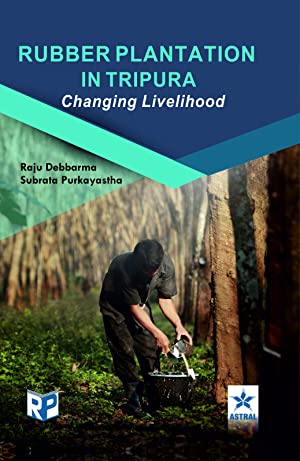 The book addresses the role of different agencies in the expansion of area under rubber plantation in the state of Tripura, the second largest producer of natural rubber in India. It presents important facts related to diverse livelihood opportunities of the households rehabilitated through the rubber plantation scheme. In 1960s Rubber trees were introduced in Tripura, a non-traditional rubber growing state, to help in the rejuvenation of the forests impacted by jhum cultivation and rehabilitate the landless jhumia families into settled agriculture. With time the economic and ecological benefits of the rubber trees attracted the attention of both the private and public sectors. This resulted in the commercial plantation of rubber trees both by the individual/private owners and public sector undertakings. Various Public Agencies emerged, that initiated Rubber plantation-based rehabilitation scheme to improve the socio-economic status of the marginalised landless population including the jhumias, who were lured into settled agriculture. The book critically assess how far the Rubber plantation scheme has enabled the jhumia families to become the owner of the rubber estates. About the Author Dr. Raju Debbarma has completed his M.A in Geography, M.Phil and Ph.D. from the Department of Geography, North-Eastern Hill University, Shillong. He has participated in national and international seminars and workshops. He has published research papers in National and International journals and in edited volumes. His interest area of research includes rubber plantation and its related issues in the state of Tripura. Dr. (Mrs.) Subrata Purkayastha (Ph.D.), an ardent researcher, teaches Geography in North Eastern Hill University, Shillong one of the premier institute of North-East India. She specializes in population and cultural geography having a keen interest on spatio -temporal changes brought about by development activities in North-East of India and the response of especially the various smaller communities who till recently were living in close proximity to nature deriving their livelihood from direct contact with natural resources. Dr. Purkayastha has published numerous research papers in leading professional journals and jointly edited a book titled -Rivers and riverine landscape in North-East India.